Coach Cornel Thompson graduated from West Orange High School in 1966, earning a scholarship to Panola Jr. College and McNeese State University where he earned Little All-American honors as a catcher on the baseball teams, as well as ALL-Gulf South Conference at McNeese in 1970.  He graduated from McNeese State University in 1971 with a B.S. in History and P.E. and earned his Master’s Degree from McNeese in 1975 in Education and Administration.  Beginning his career as head baseball coach at Kirbyville High School in 1971, he was named the head baseball coach at Stark High School in 1974.  Cornel was named Coach of the Year in baseball in 1976.  Since the schools merged in 1977, Coach Thompson has been the linebacker coach, powerlifting coach, equipment manager and off-season coordinator, as well as heading the summer program.  He was later named the asst. head football coach and defensive coordinator under the direction of Coach Hooks.  He served as head baseball coach at WOS for 5 years during the late 1990’s.  Coach Thompson’s personal achievements in football include coaching 56 All-District Linebackers at West Orange-Stark High School -1977-2000; 2004-2017; coaching 21 All-State Linebackers; 2 State powerlifting champions in 2011.  Coach Thompson was an integral part of the WOS State Championship teams in 1986 and 1987 and the State Finalist teams in 1988 and 2000.  Having been named Head Coach in April 2010, his teams have finished no less than the 4th round, while finishing as the State Finalist in 2014 and 2017 and the State Champions in 2015 and 2016.  His record as head coach at WOS is currently 118-20 with the 2016 team setting records in both offense and defense while going 16-0.  Special honors include his defensive state-wide rankings in Texas High School Football, which consist of:

Coach Thompson cites as one of his greatest accomplishments as being named Teacher of The Year not only for his campus but for the WOCCISD District in 2010-2011.  He was named Coach of the Year in 2000 by the PA News because of how well his defense performed during the football season of 2000.  He was named Powerlifting Coach of the Year in 2011 by the Southeast Texas Coaches Association and has been named Football Coach of the Year for the last two years by the same organization.  Lonestar Gridiron honored him as the 2016 4A Coach of the Year.   He and his wife, Frances, have four children between them, all being WOS graduates. They are Marcus, Nikki, Michael and Chad. They have 10 grandchildren.  In his spare time, Coach Thompson raises chickens and Longhorn cattle.

On October 29, 2010 WOCCISD recognized Coach Thomas for 40 years of coaching and in 2020 celebrated his 50th year in coaching. 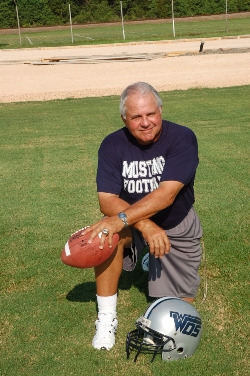 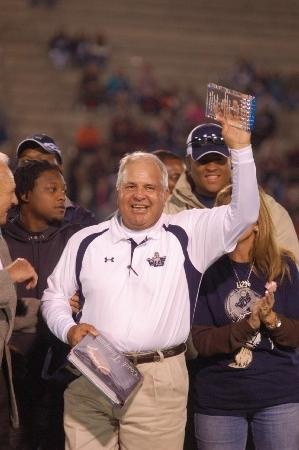 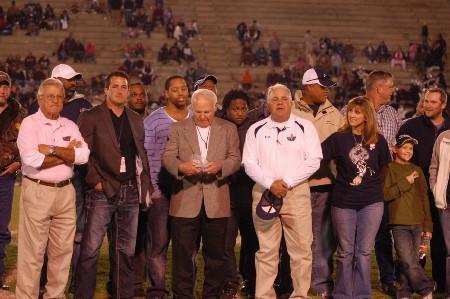